History: The National park takes its name from the Tarangire River, which crosses it lengthwise, giving support to a large wildlife population even during the dry season. During this season, between June and October, thousands of animals including wildebeests, zebras, elands, elephants, buffaloes, hartebeests and more migrate from the dry Maasai steppe to the Tarangire River.

Geography / Habitats:  It is the sheer vast number of baobabs that first capture the eye as you enter Tarangire National Park. The gently rolling countryside is dotted with these majestic trees, which seem to dwarf the animals that feed beneath them. Lake Burungi area is in the north-western part of the park and a  drive in this area will offer you fascinating opportunities to watch large herds of flamingos and other species of birds feeding on aquatic organisms in Lake Burungi. This area also contains an isolated population of Oryx. The landscape and vegetation are incredibly diverse with a mix that is not found anywhere else in the northern safari circuit.

The swamps are the focus for 550 bird varieties, the most breeding species in one habitat anywhere in the world. Tarangire’s pythons climb trees, as do its lions and leopards, lounging in the branches where the fruit of the sausage tree disguises the twitch of a tail.

Of interest: Guided walking safaris. Day trips to Maasai and Barabaig villages, as well as to the hundreds of ancient rock paintings in the vicinity of Kolo on the Dodoma Road 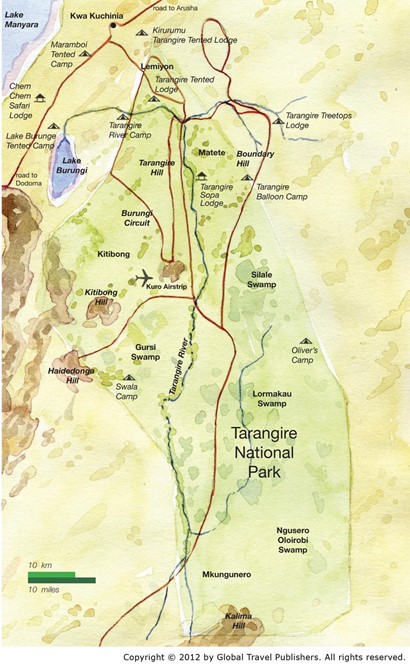